It has been around forever

Council Candidate Cliff Stanton, who is running for the seat occupied by Oliver Koppell, recently threw the kitchen sink at Assemblyman Jeffrey Dinowitz. In an opinion piece in the Riverdale Press, Stanton said Dinowitz "has hijacked our local community board, distributed public money in exchange for political support, used his government office

to advance the fortunes of candidates he favors or can control, conspired with a local tabloid publisher to carry out his political vendettas and actively blocked progressive proposals that do not emanate from his office."  Dinowitz responded in a letter of his own defending his positions and accusing Stanton of going negative.

Posted by Tony Perez Cassino at 6:31 PM No comments:

Bronx DA Getting Pushed Out?

Are the Bronx Dems pushing out Bronx District Attorney Bob Johnson?  Newspapers, including the New York Times, have reported that there is a movement to oust Johnson after a series of reports about the dismal performance in the Bronx courts and by Bronx DA's.
Posted by Tony Perez Cassino at 7:28 PM 3 comments: 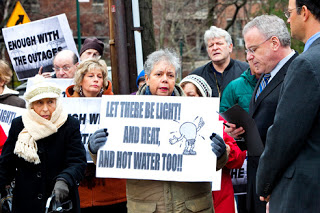 This past week the Riverdale Press reported on interesting two items involving Assemblyman Jeffrey Dinowitz. First, Adam Wisnieski of the Press reported that Dinowitz has taken over as the head of the Assembly Delegation for the Bronx.  I guess he can now boss around the other 11 Bronx Assemblymembers -- wonder whether Jose Rivera will pay any attention to him?  Second, it seems that Dinowitz has been making himself a pig at the trough over at our court system, where the Riverdale Press reports that he is raking in tens of thousands of dollars through appointments from judges on matters. For example, one judge that Dinowitz recently helped to get elected has appointed him to more matters than anyone else. Dinowitz will say he was the most qualified and politics had nothing to do with all those appointments (btw, Oliver Koppell's wife Lorraine is also a top beneficiary from judges).  It's good to see that clubhouse politics and good old fashion patronage is alive and well -- even with our "reform" politicians.
Posted by Tony Perez Cassino at 12:50 PM 25 comments: 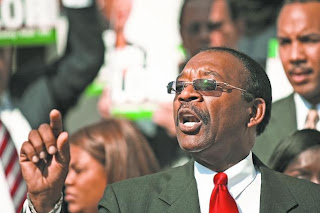 A former top aide to State Senator Ruben Diaz, Sr., has pleaded guilty to stealing more than $500,000 from two not-for-profits closely linked to Senator Diaz. The Senator founded one of them and his wife served as the executive director of the other. The Daily News reports that "Diaz had no comment on the guilty plea. But last April, he lashed out at law enforcement in his “What You Should Know” blog for not arresting Gardner in 2007 after he supposedly confessed to an FBI agent. Clement Gardner was allowed to embezzle thousands of dollars, under the knowledge, approval, advice and direction of law enforcement agencies that are supposed to protect the people of the State of New York,” Diaz wrote 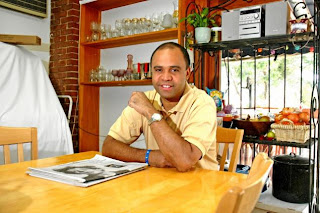 Now that former Bronx Borough President Adolfo Carrion has secured the Independence Party line for Mayor he is working to get into the Republican primary. He needs 3 Republican county chairman to support him to get that line, and, as the Village Voice reports, his chances just got better because of the upheaval over in Staten Island, where it's Republican County chairman just resigned.  Of course, the Daily News loves to bring up that scandal about his porch so he is going to have to try to change that tune.
Posted by Tony Perez Cassino at 12:04 PM 15 comments:

Dinowitz Attempts to Handpick Next Councilman 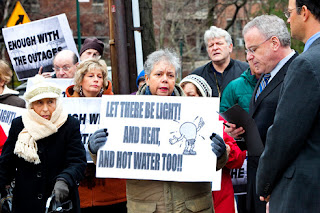 As the Riverdale Press reports, Assemblyman Jeffrey Dinowitz is intent on installing his former staffer Andy Cohen as Councilman Oliver Koppel's replacement. Despite his thin resume and lack of public recognition, Cohen has already lined up an array of elected officials at the behest of Dinowitz. Dinowitz has begun the Cohen push in earnest, parading him out before a press conference last week attacking Con Edison (see photo with Cohen at Dinowitz's hip).  Expect to see a lot more of that.  The only other announced candidate at this time is community advocate Cliff Stanton.
Posted by Tony Perez Cassino at 5:19 PM 33 comments: 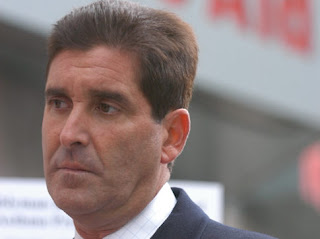 Bronx State Senator Jeff Klein has found his way back to the top of the State Senate by brokering a deal with the Republicans to share power.  Klein, who founded the breakaway Independent Democratic Conference last year with three other Senators, is has the votes to decide which party is in power.  As Adam Wisnieski at the Riverdale Press reports, Klein's move angered some fellow dems but Klein is describing it as governing by coalition. Hard to say it can be worse than we have seen in the last decade.
Posted by Tony Perez Cassino at 5:00 PM 16 comments:

Please send along any suggestions or tips for stories that should be featured. You can send it along to tonycassino@gmail.com.

Tony Perez Cassino
I am a community activist and politically involved life-long resident of the Bronx (that is if you don't count the first 4 years of my life, which were spent in Bklyn.). In 2010, Mayor Bloomberg appointed me to serve on the Charter Revision Commission that put a two-term limit back on the ballot. I serve as Chair of the Van Cortlandt Park Conservancy and Chaired Bronx Community Board No. 8 (Kingsbridge and Riverdale) for many years. I am a founder of the Northwest Bronx Democratic Alliance, and ran for the NYC Council in 2009 in the 11th Council District (lost to 40-year politico Oliver Koppell). I am an attorney at a law firm where I coordinate our pro bono work. I live in Riverdale with my wife and two kids.